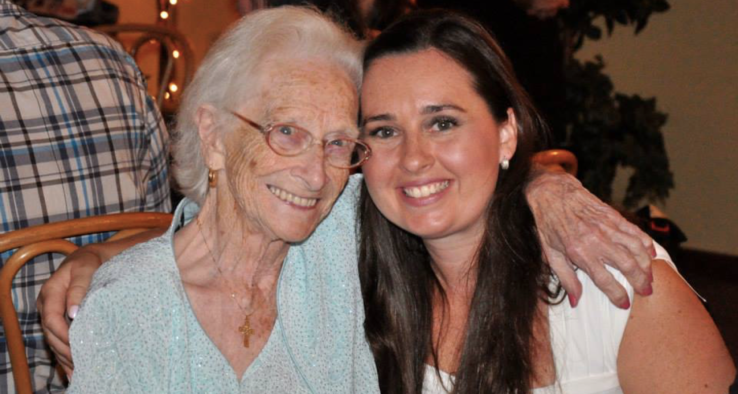 A Story of Love and Resilience

Melissa and her Nana, Dottie, were always very close; Dottie was like a second mother to her.

The oldest of three siblings, it was understood that Melissa would be the one to take care of their grandmother as she got older, a challenge from the beginning illustrated by a story that Melissa recounts. When, in order to convince a very feisty Dottie at age 87 to stop driving, she needed to remove her Nana’s car battery.

While Melissa’s story might sound like the typical challenges you would anticipate if you were needed to care for a loved one with dementia, what makes her story unique is that Melissa is only 33 years old. In addition to her age, Melissa’s increased responsibilities weren’t easy given her entire family (including Dottie) lived in Boston and she lived in Santa Monica.

When it became clear that Dottie could no longer live alone, Melissa and her fiancé́ (now her husband) Louis, moved Dottie to Los Angeles to share their one-bedroom apartment.

Eventually, Melissa would return to Boston to pack up and sell her Nana’s house while Louis packed up their apartment and found a two-bedroom home for the three of them. As Dottie’s dementia progressed and her needs increased, Melissa could no longer work. Bringing her Nana to OPICA two days a week became her lifeboat. While attending OPICA presents financial challenges, it’s become essential; Dottie looks forward to coming to OPICA and Melissa enjoys having time for herself.

At an age when most young women would be building a career or starting a family, Melissa is Dottie’s world. And yet when talking to her, there is no resentment or regrets. She is grateful that she can be here for her Nana and grateful for OPICA to help them on their journey.